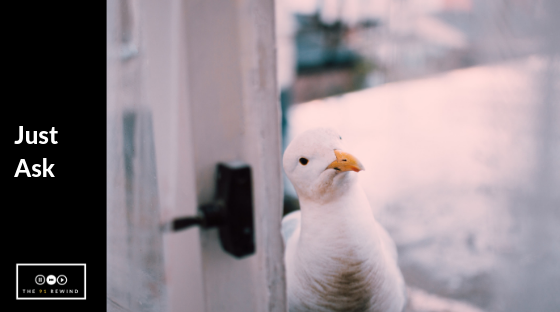 Whenever we ask a question, there are two typical answers we can receive:

“yes” or “no”. I firmly believe that we skip asking what we perceive to be a tough question because we fear that the receiver of our inquiry will respond with “no.” Why is this such a big deal? We hold back, don’t get what we want or even need, all because someone MIGHT tell us “no.”

Over the last year, I’ve been a risk taker with asking for things.

Even when the request seems big, I ask it anyway. And do you know what’s happened? People say yes more often than they say no. And, when they have said no, things have managed not to fall apart. What did I lose by asking and being told no? Absolutely nothing. BUT, what happened when they said yes? I got exactly what I wanted and needed.

What does it cost to ask?

Maybe it’s our pride. Maybe it takes courage. Maybe it’s Maybelline (JOKES!). Perhaps putting our own wants and needs first makes us feel a bit guilty. I have heard from friends and coworkers that they feel stressed and overwhelmed by all the appointments on their calendar. I’ve asked them if they have asked to move any of those appointments to better times for their schedules. And do you know what they say? No, not even once. They’ve even added that they can’t because of the position of leadership of the meeting organizer. But, I always push back and encourage them to ask anyway. Perhaps the meeting could move to another day of the week, or move to a better time in their schedule. I have had the courage to do this at work, on more than one occasion, and it’s turned out okay. On multiple occasions I’ve been able to move the meetings to a better time. On a couple occasions things couldn’t be changed. BUT, I’ve never lost my job for asking.

What do we gain by asking?

Lots of things like the courage to keep asking, continued growth from doing what we’ve been afraid to do, maybe we even get the help we need. Over the last year, Erica and I have been working hard to grow this little blog of ours. We hope to connect with new people and grow our community. In order to do this it requires us asking people to join us and be part of new things. Interviewing Kelli Lemon, Carrie Grace, and Abigail Spanberger didn’t happen by chance. It took asking, putting ourselves out there, and risking a “no” from them or their team. To this day, we keep asking and keeping striving to grow (in various ways).

What will you do the next time you have a question to ask?

I hope that you’ll just ask it anyway. I hope you’ll cast away your fear. I hope you’ll push yourself further ahead. And if you’re feeling nervous, remember to tell yourself that you’re an adorable badass! (P.S. we have #ADORABLEBADASS cards! If you need one, just drop us a line)